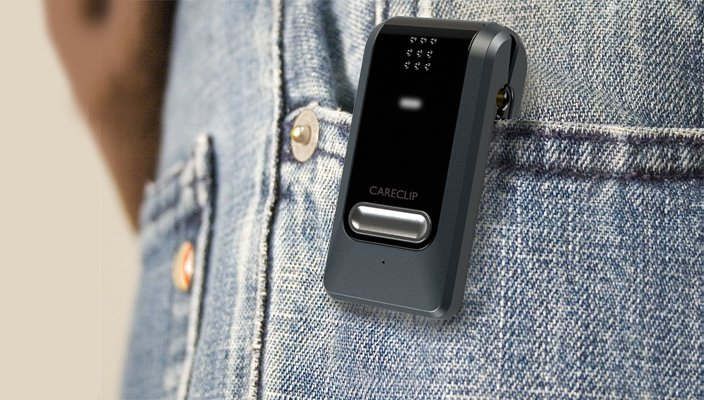 The Central Statistics Office projects there will be over 850,000 people over 65 years of age by 2026 and this will rise to 1.45 million by 2046. 30% of those over the age of 65 are expected to experience a fall. As part of this HIHI project health economic experts O’Dwyer and Murphy carried out an assessment of economic impact of automatic fall detection devices. The average cost of falls is €13,809 per person. Using 2016 population the estimated cost of falls is calculated at €2.6 billion and owing to ageing population this is expected to increase to €6 billion by 2046.

The Solution from CareClip retailed by ADA Security

ADA Security Systems set up HomeSafe to develop new technologies to enable people to remain ‘Happy and Healthy at Home’. HomeSafe offered a product called CareClip which they have integrated into the HomeSafe Care system. CareClip is a ready-made solution that has a global sim card, can be used inside and outside the home, has automatic fall detection and can alert family member / carer, monitors GPS location, can monitor movement with boundary management, has a built in panic button with two-way voice communication and can be monitored by family / care member or 24 hour manned monitoring station. Automatic fall detection devices do not necessarily prevent falls but they can reduce long lies meaning the person who falls gets help faster.

Currently the government supported Senior Alert Scheme (SAS) offers older people living alone in the community a panic alarm but this does not detect falls automatically and does not work outside the home. HIHI also carried out short trials of the CareClip technology. Participants reacted very positively when asked about owning and using a CareClip device following the trials and many would recommend the CareClip to others. While 15% already owned a CareClip device, a further 73% said they would like to own or would be interesting in owning one in the future. 58% of older people at risk of falling, surveyed during this project, would pay extra for the additional functionality of CareClip and a further 26% would consider doing so. The role out of a CareClip to all those at risk would cost €624.25 in year one and €340.50 in subsequent years for monitoring per person. A cost benefit analysis demonstrated that there was a net benefit to providing CareClip. This was the case even if the CareClip was effective in bringing quick assistance to only 25% of the elderly fallers.

There is an identified need and desire by those at risk of falling and their families for technological support. The existing solutions on offer by SAS are limited in functionality and usability. Unfortunately since the conclusion of these trials, the company Motech Devices which developed and manufactured CareClip has ceased trading and the CareClip device is no longer on the market. However ADA HomeSafe platform is still on offer and the company is looking for a replacement automatic fall detection device to include in its service offer. There are other similar products on the market. Recent developments in smartwatch technology also offer automatic fall detection functionality.

The project has highlighted the need for further research. In response to ageing populations a broad range of fall detection interventions are emerging. Several types of technology-based interventions have been developed. While evidence on their clinical effectiveness is beginning to emerge their cost effectiveness is yet to be fully demonstrated in the literature.