Our PI’s Prof John Higgins & Prof Seamas Donnelly, in the ‘Irish Medical Times’ on health innovation and the potential for change through our Postgraduate Diploma in Healthcare Innovation 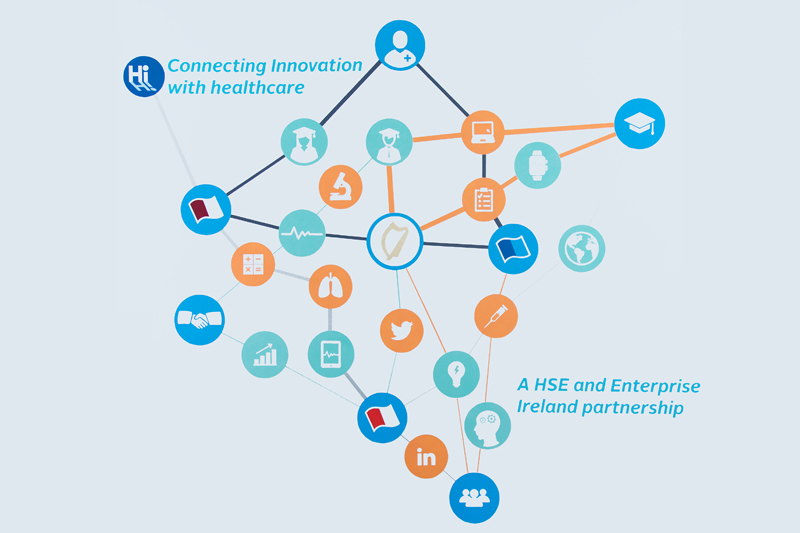 Hub is an inspiration for integrated health innovation

Lead Principal Investigator of the Health Innovation Hub Ireland (HIHI), Prof John Higgins, is urging doctors and healthcare staff to come forward with new and inventive ideas. If you have an innovation, if you think you could improve our health service and you just want someone to help move your idea to reality, the door of the Hub is open.

Prof Higgins, who is Clinical Director for Maternity Services for South-South West, and Professor of Obstetrics and Gynaecology, spoke recently to Irish Medical Times about how the joint-government initiative, HIHI, has been mentoring and fostering innovation from healthcare staff.

Prof Higgins and Course Director Prof Seamas Donnelly discussed how recently the Hub has advanced to providing a new Level 9 postgraduate diploma, incorporating a practical enterprise and theoretical studies, beginning this September to be delivered by Trinity College Dublin (TCD).

A mentor for healthcare professionals
Broadly speaking, on the one hand, the Health Innovation Hub Ireland has been set up to provide innovators working across the health sector with an avenue for their inventions or ideas. Under its remit, the Hub acts as a mentor to healthcare professionals, from funding applications to industry partnerships.

On the other hand, it is working with Irish businesses as a broker offering the opportunity to pilot clinical validation studies. In turn, this is intended to provide the health service with access to innovative products, services and devices that they may not otherwise be exposed to up to now.

HIHI was originally established by the Department of Business, Enterprise and Innovation and the Department of Health, supported by Enterprise Ireland and the Health Service Executive (HSE) to drive collab­oration between the health service and enterprise. As the last government programme for jobs gained momentum, one of the key action points in health was to set up a demonstrator hub for innovation, which led to the establishment of the HIHI.

A small organisation to begin with, Prof Higgins said the demonstrator Hub began in Cork. Largely, he suggested, because of the cohesion it appeared to have across that spectrum between the clinical service, teaching, training, research, innovation and job creation, this allowed the concept to be piloted.

The first thing the Hub did was put out a call to companies or individuals who felt they had an idea. Prof Higgins said that for companies, “All that we provided was access to the system, and we married them with the clinical area which would have an interest and a need for using that product.”

He added: “The clinical side gets access to a solution for a problem, and if you get it right, you get real synergy. It means for the company, or for the person hoping to manufacture and sell a product, they get it used in real life, they get it assessed.

“They undertake a defined project and they get an assessment and report at the end of that, which is very useful for them.”

An innovation could then progress to the next level after being assessed through the auspices of HIHI. The company or individual provided them with a report “on what we did, how it went and what the pros and cons were”, added Prof Higgins.

“On the health side, the enthusiasm is great, and if you can match with the appropriate location you will generally find within any services, enthusiasts and advocates, people who will take on the project and run with it.”

Once that happened, the idea or concept progressed into something; they had been proven as something worthwhile and needed in the clinical service.

“Health is the world’s biggest human enterprise. Ireland is uniquely successful in manufacturing medical devices and pharmaceuticals as contributors to our economic success but, if you are that strong in one area, you could be vulnerable. It is even better if you are also very strong in innovation,” Prof Higgins said.

An appetite for change
He believed that development of new devices that changed the cutting edge made us stronger and much less vulnerable in the healthcare enterprise business. That was accepted.

“I think there is an enormous appetite for change; in particular that staff are feeling new ideas and innovation are okay. There hasn’t been a culture of ‘We want you to think outside the box’. I don’t think staff feels the response to suggestions has been, ‘Yes, go for it’. What the Hub is saying, supported by the HSE, by the Department of Health and Enterprise and all research jobs creation organisations is, ‘Yes to innovation and yes to change’.”

Academic partners
The Hub was headquartered in Cork but they were also in Dublin and Galway, embedded in hospital groups and four academic partners. The purpose of having academic partners was to give an organisational framework that recognised the fact that healthcare at its most successful demanded education, research, training innovation and job creation in health to be components of the whole picture — or you did not get the kind of moving learning organisation which we needed in the long-term.

It was not meant to be an organisation that just existed in two or three hospital groups. One of the requirements in setting up the national Hub had been the extension of the initiative from three areas into all hospital groups and academic partners to become a truly extended national entity. There was a requirement for them to work on that over the next couple of years.

Essentially, the Hub was a partnership of clinical and academic centres with three strands. One was industry and enterprise, which needed the healthcare system to be open to new inventions.

“The healthcare system has struggled to give those opportunities to Irish-based homegrown enterprises. Ireland is a really small place and for anybody ambitious it is very difficult.”

Working through the Hub provided the advantage of access to the Health Research Board (HRB). Enterprise Ireland and the IDA Ireland, the agency responsible for the attraction and retention of inward foreign direct investment into Ireland, and meant permission for a new product to be trialled. The second strand aimed to provide somewhere to start and where to bring ideas. “I have been looking at this that has not been strong in our culture,” Prof Higgins added.

The third strand to the Hub had been education which he said was so important to change different cultures. “We have had two workshops and they have been oversubscribed,” he said.

Here Prof Donnelly, who is also Professor of Medicine and Director for Global Relations at the School of Medicine, TCD and HIHI Principal Investigator, said one of the challenges from the HSE and Enterprise Ireland to TCD had been to develop and offer general training focusing on rapid adapters in the healthcare sector.

What they had developed in response had been three levels of complexity. One was a roadshow introducing the Hub, their strategy and what their educational pillars were in the context of healthcare innovation.

From that, they had followed up with those who had participated and had shown they were interested in further educational opportunities focused on innovation. If they wished, they could progress to attending five one-day workshops held over a year. “If they attend all five, they receive a certificate as ambassadors of innovation awarded by the Hub.”

And now, for those who were committed to the next level, TCD were offering a Diploma at Level 9 over one year.

Looking to this first year of the postgraduate diploma due to run from coming September to August 2020. It is structured to provide in-depth study into details and different aspects on adoption of innovation as well as challenges and obstacles to adoption of innovation.
Parallel to that, students will also do an individual research project related to their own work environment.

Encouraged to find solutions
Within the first semester of the diploma they will be encouraged to identify a problem and potential solution within their work environment. With guidance and expertise of the Hub, from an education perspective, they will then work out how the solution could be implemented in the work setting. The practical project is to be undertaken particularly across the last eight months of the diploma.

Commercial potential
Prof Donnelly expressed the hope that there would be a number of projects which may turn out to have commercial potential and the Hub could introduce to the Enterprise Ireland commercialisation pathway. The individuals will carry out all their own development work on their ideas and concepts but the Hub will remain available in offering an advisory role. “And they have an opportunity to take that idea as far as is feasible,” he added.

The postgraduate diploma is open to HSE employees and people working in the healthcare sector, both in the pharmaceutical industry and with other healthcare providers, whether in the private or public sector. They will be expected to have a basic second class honours degree, and would need to be working in the healthcare environment.
The course aims include inspiring participants in the context of innovation, to show them detailed examples of where it had worked in the health sector globally, and to give them an ability to assess in a comprehensive manner, the value of any new applications proposed to them.

Fear factor of change
Prof Donnelly believed that a lot of resistance in the healthcare sector could be through a fear factor of change. He felt that if you had people who were open to change and the adoption of technology, that could impact on the approach by a whole department, and benefit patients ultimately.

The diploma is built around small working groups, assignments and project working groups as well as distance learning. The core of the postgraduate diploma involves six foundation modules and the parallel innovation project running as a sequence of two linked modules. There are some formal lectures but the focus is on guiding the student along the path. The programme is based in the HIHI, in the main hospital on the St James’s Hospital Campus.

The six two-day focus workshops are held on Fridays and Saturdays every six weeks.

Prof Donnelly added that the number one strategic pillar within TCD was innovation. The university owned a site at the Grand Canal Dock where the major tech companies were based, and was planning significant investment in building an innovation quarter over a three- to five-year plan and ultimately, the Hub would be based there.